HOW THE TRADERS BECAME RULERS


The children were engrossed in reading
the story of two cats and monkey during the recess. On reading this story, Jay and
Mitali were making fun of each other. Their class teacher who was sitting beside them
said, “Children this too is a policy. The third party takes advantage of a quarrel between the two. The British had
expanded their empire in India with such a policy.’ Jay asked, “Sir, how is that
possible?” The class teacher replied, “Let us go to class, and there I will explain
about how the British came to India and established their rule over the Indians.”
By the mid of 18th century, the British had started to emerge as a strong power on
the Indian political horizon. Do you know that the British came to India only for
trade? Initially they took permission to trade in Indian states. Then how did they
become the rulers of entire India? The history of the British rule arouses many
such questions. To serve their economic interest they increased their political hold
on India with the use of British diplomatic tactics 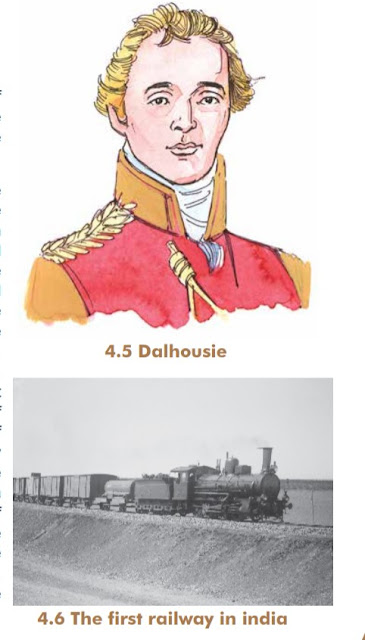 When Wellesley came to India as the Governor General, cut throat competition
existed between England and France. It was necessary to check France from
becoming powerful in India so as to expand the British Rule in India Wellesley
introduced a new plan which was known as the Subsidiary Alliance. As per the
scheme, any princely state that accepted the alliance had to keep and maintain the
British Army as well as keep a British representative in the Royal Court. This way, the
British could maintain their Army without spending any money. However, the princely
states were not allowed to utilize the army at their own will. This system, which made
many feel secure in the beginning, made them feel enslaved and threatened.
Subsidiary Alliance acted like a slow poison for the princely states of India. The Indian
States that became the victims of the Subsidiary Alliance were Hyderabad, Mysore,
Ayodhya, Jodhpur, Gaekwads of Vadodara, Peshwas of Pune and Scindhias of
Gwalior.

Nizam of Hyderabad was the first victim of Wellesley’s ‘Subsidiary Alliance’. Then it
was Mysore and Ayodhya. Tanjore and Karnataka met with the same fate. The British
made the Marathas fight amongst themselves and consequently made them accept
the Subsidiary Alliance.

Owing to the losses incurred by Nizam in his fight with Marathas, he was the first to
accept this Alliance. Tipu Sultan of Mysore refused to do so, but after the British victory
in the Fourth Anglo-Mysore War, Mysore was forced to become a subsidiary state.
Maratha chief fought amongst themselves after the death of Nana Fadnavis. One by
one all the Maratha states became the victim of ‘Divide and Rule Policy’ of the British.
The other states, namely Ayodhya, Gorakhpur, Tanjore, Karnataka, Farukhabad, also
suffered the same fate. In this way, within a span of 7 years, Wellesley expanded the
Company rule and made the British the supreme power in India.

Dalhousie aimed at helping the British traders to make huge profits from the trade of
tea coffee and cotton by capturing the areas that produced these commodities on a
large scale. To consolidate the British rule in India and to run the administration
smoothly, many changes were introduced by Dalhousie in India. During his tenure, the
first railway line was started between Mumbai and Thane (1853 C.E.). The modern
postal system started in India and wireless system between India and England too
was introduced during his tenure. He passed laws to ban child marriage and
advocated widow re-marriage. English education spread in India during this time. The
first three universities in India were established in Mumbai, Chennai and Kolkata in the
year 1857 C.E. Thus, these reforms were basically for the expansion of British rule
and ease in administration. Although Indians benefitted later on, they had to suffer a
lot with the introduction of British reforms.


After the policy of Subsidiary Alliance, Dalhousie’s policy of Annexation shook the
whole nation terrible. This resulted in the dissatisfaction among the people towards the
British. You must have seen the film ‘Kranti’ and ‘Mangal Pandey’. If you have not seen
then try and see these movies. At this time, the people were suppressed under the
dictatorial regime of the British. In addition to that, the reforms made by Dalhousie
added fuel to fire. Different people reacted differently to railways, facilities of post and
telegraph and western education. Orthodox people felt that the British wanted to
destroy their culture. The reforms done by the British were basically for running the
administration smoothly. The dissatisfaction of people had reached a point of
saturation and they were in the state of rebellion which resulted in the freedom
movement of 1857.

1. On an outline map of India, mark Satara, Nagpur and Jhansi that were annexed by
Lord Dalhousie.
2. How did the British benefit by Subsidiary Alliance and Annexation Policy?
3. Why were the British not successful in establishing their rule in Punjab during the
reign of Maharaja Ranjit Singh?
4. What reforms were made by Dalhousie in India?
5. Discuss about the special features of Subsidiary Alliance and Annexation Policy.

Tag : HOW THE TRADERS BECAME RULERS