Dhanvin was roaming in the garden with his mother. While walking, a question arose
in his mind. Dhanvin asked his mother, “What is land made up of?” Mother replied,
“Do you see the Sun every day? The Sun too has a family which is known as the ‘Solar
Family’. Our Earth is one of the members of the solar family. The most important point
is that only the Earth among all the members of the solar family has got the suitable
temperature, water and air to sustain living beings.”
Generally, it is believed that part of Sun, which has been detached form the Sun after
the collision; is Earth. At the time of its origin, it was in the form of a fireball. This fireball
started to cool down slowly. Many elements of the Earth got transformed into liquid
and further into solid form. During this process, the elements which got transformed
into solid are known as the lithosphere. The elements which got transformed into liquid
are known as the hydrosphere. The elements which transformed into gases came to
be known as the atmosphere. Above all, the living world which developed due to land,
water and air came to be known as the Biosphere. In this way, the four spheres came
into existence on Earth.
STD 8 LESSON NO 2 WHAT IS AROUND US? 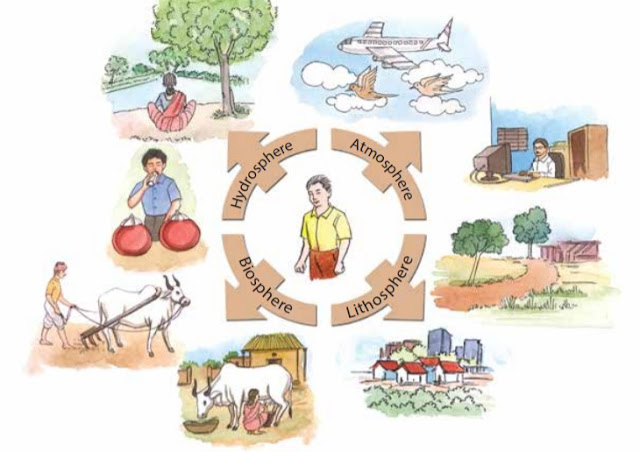 Lithosphere
STD 8 LESSON NO 2 WHAT IS AROUND US?

The sphere on which we live is known as the lithosphere. ‘Litho’ means rock and‘sphere’ means layer. The upper layer of the Earth is made of soil and solid materialslike rock. Approximately 29% of the surface of the Earth is covered with lithosphere.This layer is almost 64 km to 100 km thick. The thickness of the lithosphere is not thesame everywhere on the earth. Similarly, their interior and exterior do not haveidentical physical features. It is mostly made up of substances like soil and rocks

Land forms like mountains, plateaus, plains and valleys are seen on the lithosphere.
The temperature increases as we move towards the center of the Earth The molten
rocks in the interior of the Earth are known as Magma. There are many gases present
in the interior of the Earth which rise up with pressure and heat. But the pressure of
rocks of the surface of the Earth is equally strong. Thus, balance between the two is
maintained. So, the crust of the Earth does not break. When the balance between the
two is not maintained the crust breaks and a volcano erupts.
“Mummy, how is the lithosphere useful to us?”
“Where can we construct our home if the lithosphere is not there? Without lithosphere
how can we get water to drink, agriculture for food, minerals for industries and forests?
Draw a picture depicting all the details you observe on lithosphere based on our
conversation.”

Now, let me talk to you about Hydrosphere. The Hydrosphere is the liquid component
of the Earth. It includes the oceans, seas, lakes, ponds, rivers and streams. On the
surface of the Earth, the area of water is more than that of land. Hydrosphere covers
71% of the Earth’s surface. A water body in hydrosphere that carries a huge amount
of water is known as the ocean. These oceans are the Pacific Ocean, the Atlantic
Ocean, the Indian Ocean and the Arctic Ocean. All these oceans are connected with
each other. The water bodies close to the land are known as seas, bays, straits, gulfs,
etc. The oceans on the earth are huge and deep. Valleys with depth of 10 to 11 kms
are located at their bottom. The ocean bed has similar features like that of the surface
of the Earth. It has high mountains, plateaus, vast plains, valleys, etc.
‘Mummy, how much water will there be in the seas? Since sea water is salty, is it useful
to us?’
Yes, oceans contain 97% of the total amount of water on the earth. Approximately 1/3
of remaining water is trapped in ice-caps and glaciers (at Poles,Himalayas and other
mountains). Some water is accumulated in the lakes and some flows in the rivers and
some is stored in the interior of Earth as ground water. The amount of potable(fit fol
driking) water is less. Fresh water is precious. This Fresh water is required by living
beings for their existence. The moisture for rain, which is the main source of fresh
water, comes from the oceans only.
Valuable chemicals, minerals, salt, fishes, etc. are found in the seas. As we have living
organisms on the land, in the same way, the seas and oceans have aquatic life inside
them. The tremendous force of waves, tides and currents of oceans are potential
sources for generating electricity. Besides, these oceans are also useful as
waterways.

The sphere of air that wraps the Earth from all sides is called Atmosphere. It extendsapproximately upto 1600 km from the surface of Earth. It cannot be seen clearly withthe naked eye like Lithosphere and Hydrosphere. Atmosphere is composed of variousgases, water vapour, dust particles, smoke, salt, micro organisms etc. Atmosphere iscolourless, odourless and transparent. Solid, liquid and gaseous elements areincluded in the Atmosphere. It contains approximately 78% nitrogen, 21% oxygen andI % other gases.When we go higher from the surface of the Earth, the amount of most of the gases inthe atmosphere decreases. Carbon dioxide gas is heavy so it is found more in thelower layer of the air.Ozone gas comprises of a very small proportion in the air. This gas absorbs theultraviolet rays from the Sun and protects the Earth from excessive heat of Sun. Thisgas is more in proportion in the morning in the open ground and in the air near the sea.

Tag : WHAT IS AROUND US?